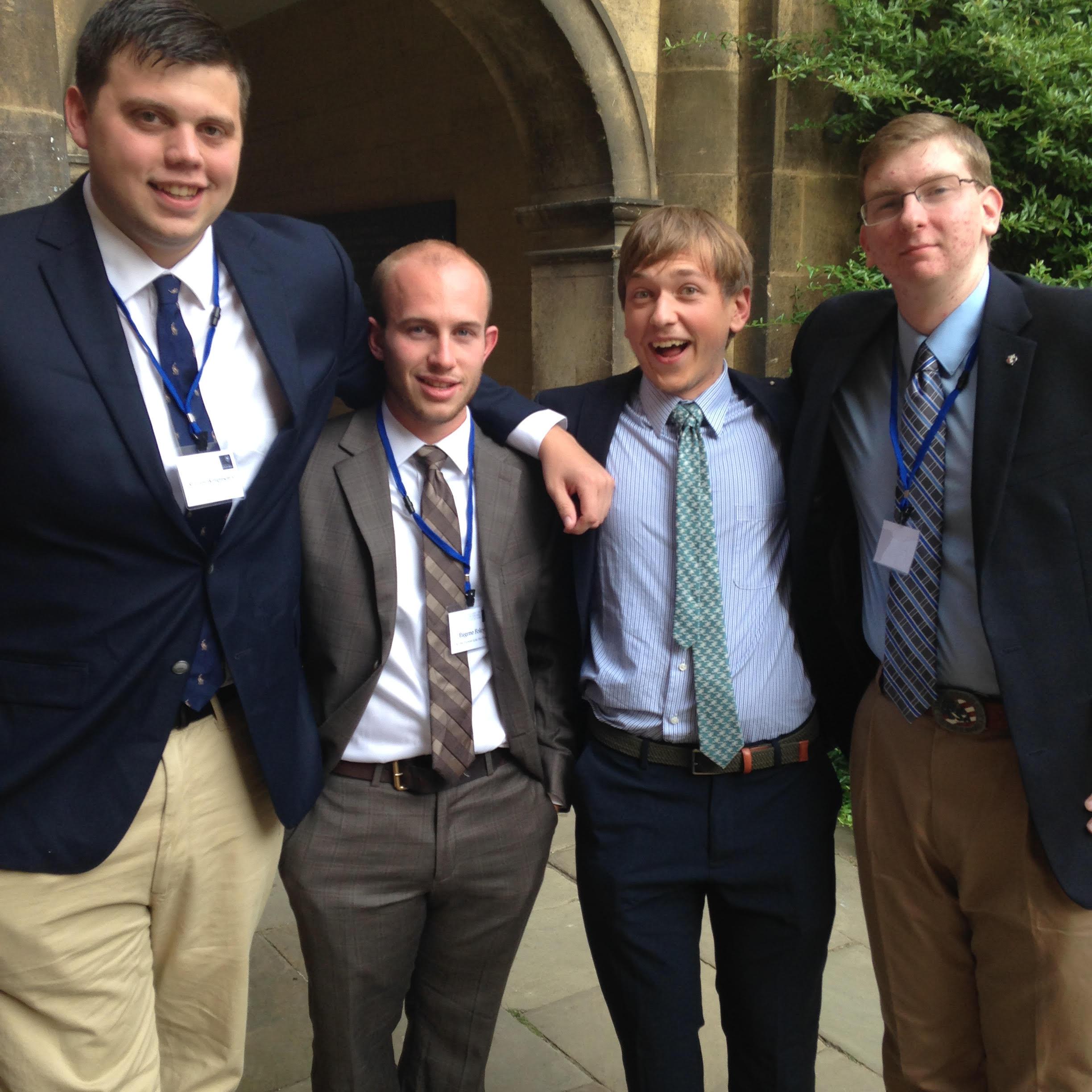 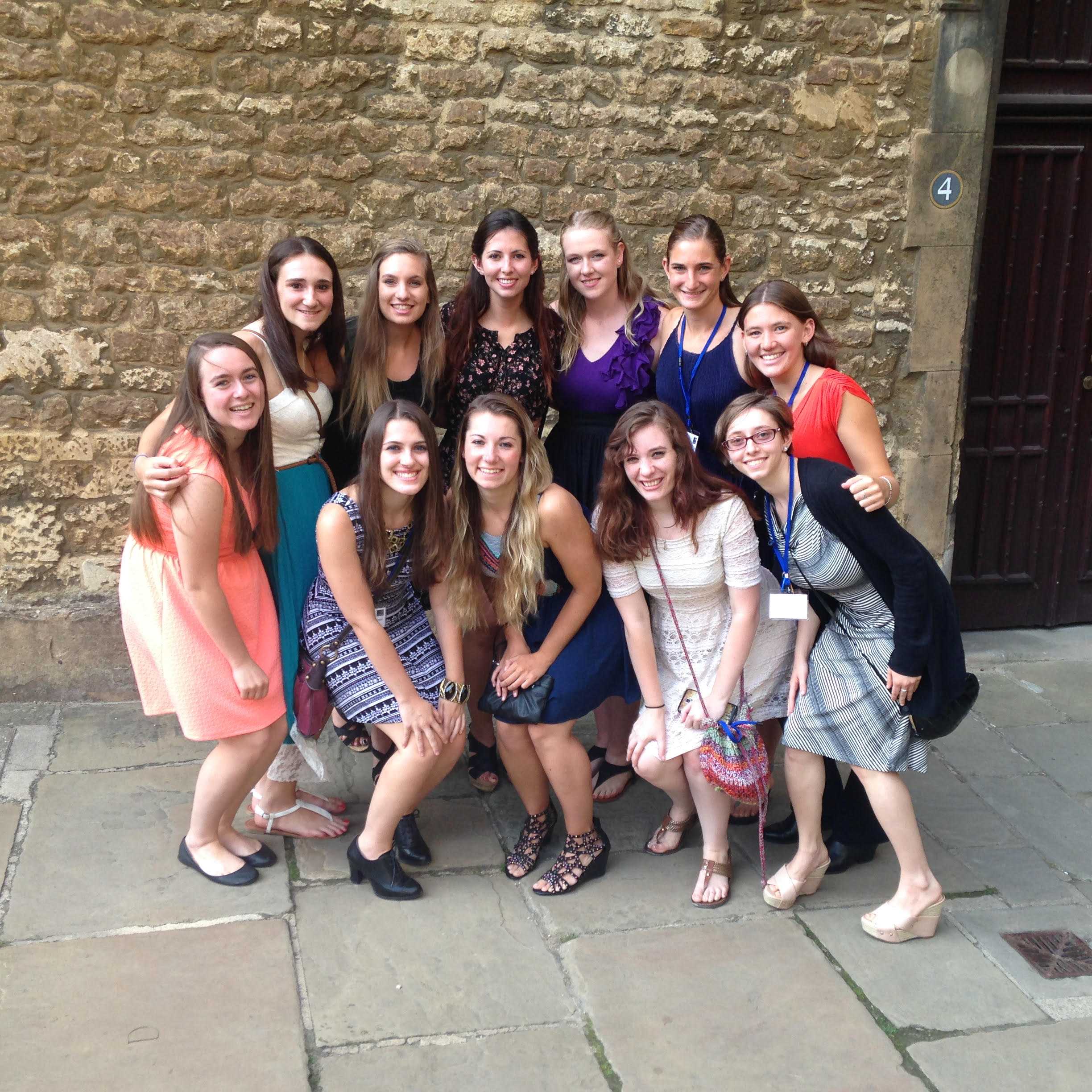 On a multitude of sunny days in July, twenty or so twenty-somethings boarded a variety of aviation-specific vehicles and traversed across the Atlantic. These students, this reporter among them, were on their way to spend three weeks studying at Merton College, Oxford.  Some had made pre-study plans, some had post, and some had both. But what awaited them there at Merton was more than they ever could have planned for.

“I hit my head on everything” claims one student, Bill Wrightson, who has an affinity for altitude, “but other than that it was a fantastic experience!” And, folks, he is not wrong. Both fantastic, and built for those who, like this reporter, are height-challenged, Merton College is absolutely breathtakingly beautiful.

Located right in the middle of Oxford city, Merton is the perfect location for our eager students to lay their scene. Minutes from posh shops and the City Centre, surrounded by the Christ Church gardens, and unbeatable proximity to the chips cart. Deanna Viola Comments that “[she] felt really privileged to have lived in a city and studied at a university built in the 13th century. Most times it felt unreal, that’s how beautiful it was.”

These students were greeted warmly–well, as warmly as British culture allows, and made their way to their flats on that first day. Some incredible views from windows were had, and several balcony-located serenades were sung. And the first dinner? Quite possibly the most delicious food those weary travellers had ever tasted.

Classes began and our students were pleasantly surprised by the ‘hip’-ness of our tutors and peers alike, especially considering an age difference spanning almost seventy years! Say what you will about the early-bird special crowd, but they can certainly hold their own. From pub quizzes to field trips, it was lovely to interact our spry grandparental-aged classmates. Danielle D’Ambrozio describes it as “the most amazing experience of [her] life,” stating that she “didn’t want to leave.”

Our field trips were fun-ducational and Amanda Schuepfer states that “the field trips we took to gardens were great learning experiences, and I saw so many beautiful plants and flowers. The chance to study at one of the world’s best universities was a once-in-a-lifetime opportunity and I have grown so much as a person from the experience.” And she is certainly on point there! Trips to Charles Dickens’ House, The Darwin House, and the ever-wonderful Water and Steam Museum are among the many places that opened and illuminated minds this summer!

For this reporter, the class offered on Nineteenth Century Literature was absolutely invaluable to my education, particularly given that I was able to read books in the place where they were written. I strolled streets murmuring lines of T.S. Eliot, walking the same steps that he himself walked. And if that is not mind-blowing, I do not know the meaning of the term.

Three nights a week, we were privileged to partake in formal dinners, and each of our students was, in turn, invited to sit at the ever-prestigious ‘High Table,’ where we dined among more degrees than a 1990s boy band. It was an honor and privilege to  to converse and connect with such wonderful people who served as administrators and tutors of our program at Merton, and we are better for it.

All of this, of course, this trip and the amazing experiences that were had, would not have been possible if not for the generosity of St. Thomas Aquinas College. If not for our scholarships, if not for the time and effort on behalf of Dr. Marell and Dr. Wynne, and the rest of the faculty who have pushed/helped us along these past three years.

If anything can be said, it is this: these students, this reporter included, will begin our senior year at STAC as different people. We have seen more than perhaps we ever thought we would see; we have learned and grown into people that are a little bit closer to the people that we want to be. Friendships were strengthened, tried, and strengthened again. We have become more knowledgeable about ourselves and about the world, and most importantly about our place in it. We are a few steps, and about five-thousand miles, closer to the people who we will be. And for that, we are unendingly grateful.